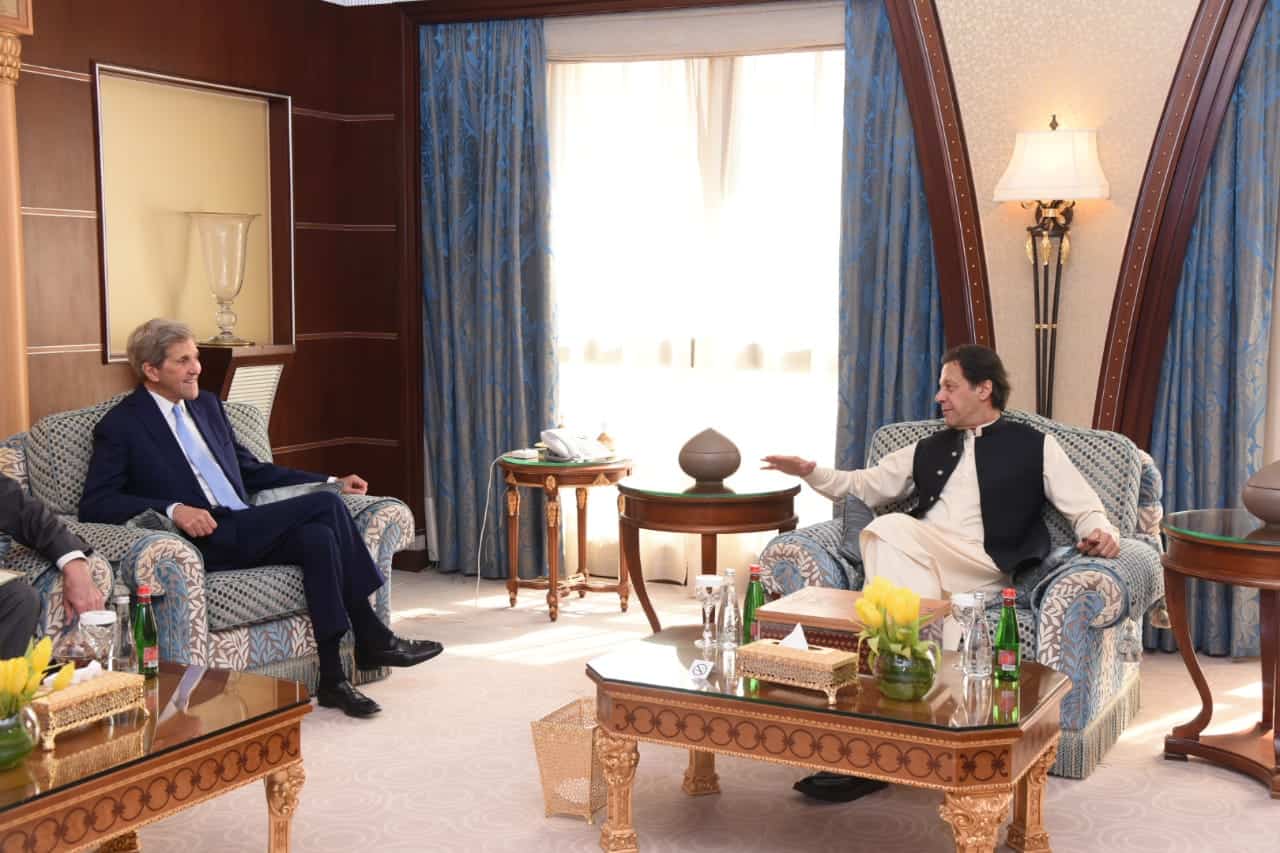 Highlighting the priority attached by the government of Pakistan to Climate Change, the Prime Minister underscored the need to reinforce national as well as global emphasis against this existential threat. The Prime Minister shared his perspective with the Special Envoy on challenges faced by Pakistan and other developing countries due to climate change, while highlighting Pakistan’s experience of launching nature-based solutions to address the environmental challenges, including the 10 Billion Tree Tsunami project.
Reviewing the ongoing collaboration between Pakistan and the United States on climate change and environment, Prime Minister Imran Khan expressed satisfaction on the recently held inaugural meeting of the “US-Pakistan Climate and Environment Working Group” which explored potential areas of bilateral Pak-US cooperation on climate action.

Special Envoy Kerry agreed that Pakistan and the US shared a longstanding relationship, which should be further reinforced in areas of mutual convergence, including climate and environment. He acknowledged various initiatives undertaken by Pakistan to fight climate change. Emphasizing the priority attached by the U.S. Administration towards the issue of climate change, Special Envoy Kerry briefed the Prime Minister on various measures undertaken by the Biden Administration for developing a broad global consensus on climate action in the run-up to the UNFCCC Conference of Parties (COP-26), later this month.

The Prime Minister underscored that Pakistan and the United States should continue sharing ideas, expertise and technology to optimize mutually beneficial opportunities in the fight against climate change.

The Prime Minister also encouraged the Special Envoy to further explore possibility of enhanced bilateral engagement through the US International Development Finance Corporation (DFC) to support investment in climate mitigation, resilience, and adaptation in Pakistan and the developing world. The Special Envoy acknowledged the huge potential of cooperation in these areas and expressed the desire to further explore opportunities of bilateral cooperation including in power generation projects from renewable sources.

The two sides agreed to work in close coordination to determine next steps in building an effective framework of cooperation in this regard.
In the regional context, the Prime Minister underscored the importance of a peaceful and stable Afghanistan for Pakistan and the region. The Prime Minister stressed the imperative for the international community to work pragmatically to preserve peace and security, avert humanitarian crisis in Afghanistan, and prevent an economic collapse. The Prime Minister underscored the need for positive engagement and release of economic resources and financial assets for the welfare of the Afghan people.